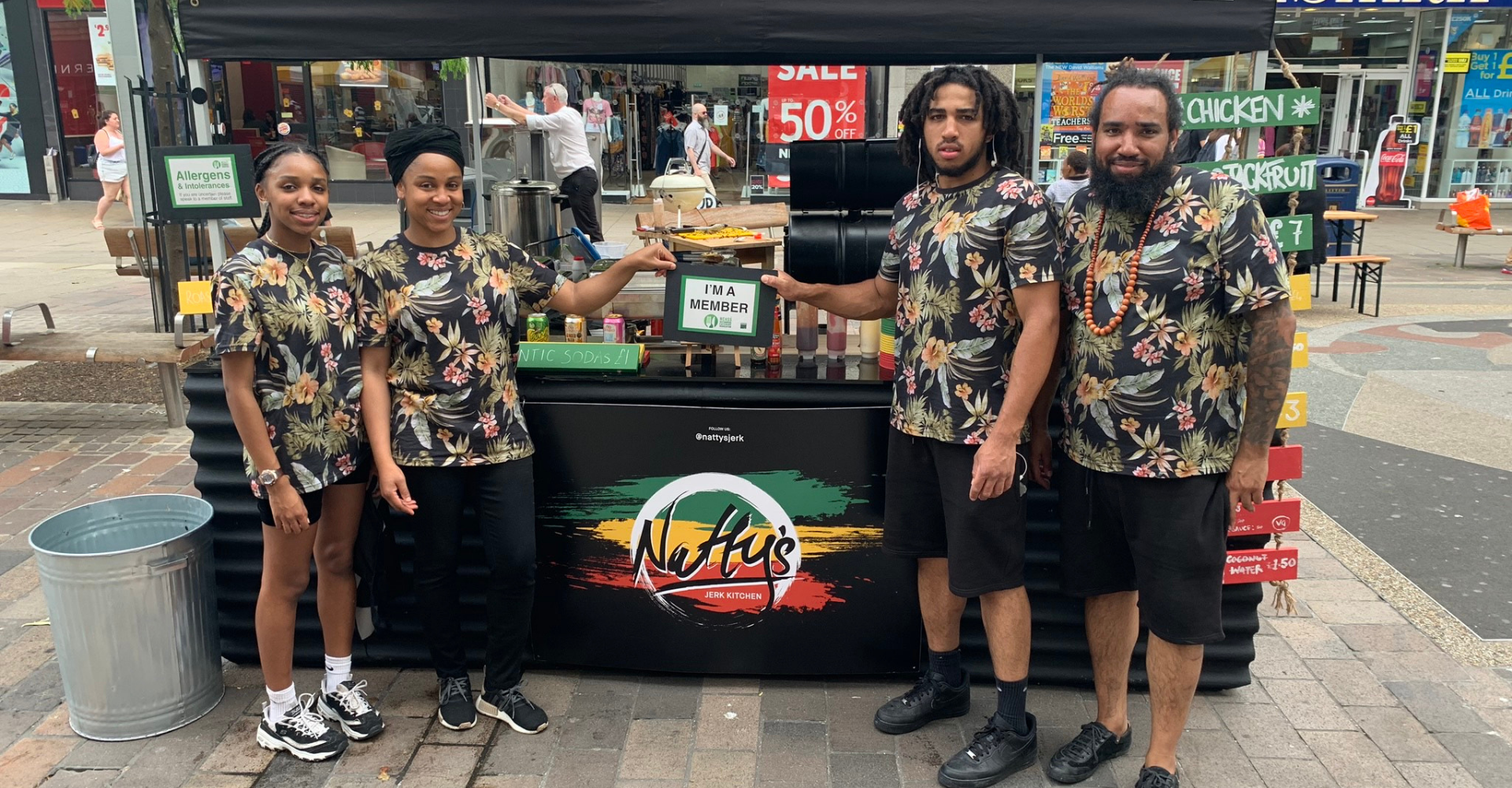 After finding the perfect home for Natty’s Jerk Shack, the team set up a crowdfunding campaign to transform their new space and create an inclusive destination which offers a taste of the Caribbean.

Set up in 2019, Natty’s Jerk Shack offers a delicious and immersive food experience to the people of Portsmouth. They use the delivery and presentation of their food to conjure an atmosphere filled with rich and exciting flavours, music, and conversation to transport their customers to the Caribbean.

Since they first opened they have only grown in popularity, expanding their business to a vintage van and a small kitchen vending spot in the Outside-In, Southsea’s exclusive food court. Though when the pandemic struck they were forced to close their doors.

Like many businesses across the world, this put them in a precarious financial position, so they moved their services into the family home to operate as a takeaway. The support they received from their community was astounding and enabled them to support the business throughout the difficult time.

Day by day, the demand for their delicious food only grew, meaning they needed a bigger and more suitable kitchen to operate from. When they finally found a space in an ideal location on one of Southsea’s main food and drink highways, they jumped at the chance. Though, unfortunately, they soon realised it wasn’t in tune with their desires and had to continue the search.

After almost losing hope, they gained access to an area of land in the city with a semi-converted shipping container on its premises. It was perfect! Though to make it the dream location for Natty’s Jerk Shack, they needed £17,000 to transform the space which they hoped to raise through crowdfunding.

When asked why they chose to crowdfund for the funding, Nathaniel Crutchfield told us, “To be honest we were forced into it! People kept telling us we had to crowdfund – that it was the thing to do. It was strange: the signs were all there  – Crowdfunder’s team was in Portsmouth and people just kept talking to us about crowdfunding! We didn’t really know what to expect and we were really nervous. We weren’t sure if we were doing the right thing but we had to give it our best shot.”

After 28 days the Natty’s team had smashed their initial target and their stretch target and went on to raise £22,750. This included a boost of £5,000 from Portsmouth City Council and Shaping Portsmouth’s Small Business Fund which supports new business start-ups and existing SMEs looking to grow, along with businesses impacted by COVID-19!

On the funding, Nathaniel said, “The pledge from the council and Shaping Portsmouth was what got us over the line – it meant that we hit the £17,000 all-or-nothing target and were then able to keep the money and aim for the stretch target. It was an encouragement, a bit of a crutch if you like, because we knew it was there and it helped us feel that the target was achievable. Although it took us a while to get it confirmed, as it came quite late in the day, it also meant that other people who pledged on our project had more confidence in us.”

The money raised through the Crowdfunder would help them transform the barren area of land into a lively centralised dining hub, creating an inclusive destination point which offers a literal taste of diversity and culture.

“We’re hoping the project will have a really good impact in a number of different ways. We’ll employ people for a start. We’ll also regenerate a part of Portsmouth that has been derelict for quite a few years and has been a bit of a black spot for criminal activity and drugs. Natty’s will transform the area and bring footfall for all the right reasons. It will also give us a chance to deliver on Natty’s core mission: using food to encourage cultural diversity and help bridge the gap between communities, helping us to understand one another.”

As Nathaniel went on to explain, Natty’s isn’t just about good food, it’s about culture, community, and heritage and there’s a rich and varied history behind jerk that a lot of people don’t know about.

“Food breaks down barriers and helps community cohesion. There’s a rich and meaningful history to Jerk  – it’s not just about adding spice. It’s quite a story: one that came about when Jamaica’s indigenous pimento trees were cut down by Spanish and British settlers to make way for sugar plantations which were tended by slaves. The felled trees were then cast aside and set on fire, resulting in long lasting smouldering fires.

“Some of the slaves escaped, running into the mountains and joining with the Maroons (other escaped slaves). They had to eat but also had to hide and had to preserve the food they had. So the custom of adding spices and burying the meat in amongst the smouldering pimento logs – for hours on end – was born. Slave hunters and their dogs were thrown off the scent and the beautiful slow-roasted, perfectly cooked meat was sustenance shared by the escaped communities of the Jamaican mountains.”

Needless to say, we cannot wait to see the incredible things that the Natty’s team achieve in the future! After such a successful first experience of crowdfunding, we asked them if they had any advice for others out there thinking about raising money from the crowd. They said, “I wish we had added a video – it didn’t stop us hitting the target but a video would have added a really nice touch and I regret not doing one.

“It’s really important to get a handle on the rewards. We did really well with our rewards but lots of the questions we had along the way could have been avoided if we had been clearer about what was on offer. For example, what the terms of the offers were or the sizes of the t-shirts. Once someone pledges on a reward you can’t edit it so it’s important to get it right up front.

“It’s also important to have a grip on how much the rewards will cost you to deliver. We had 237 pledges from 200 supporters, 192 of which involved a reward. We did really well and worked with other organisations to make sure we could offer what we said we could, but I’d really advise others to think carefully about what rewards to offer and how much it will all cost.”

Feeling inspired? Find out if you could be eligible to unlock +Extra funding for your small business from Portsmouth City Council and Shaping Portsmouth’s Small Business Fund!